Humans tend to suppress difficult times in their memory.  Places, people, and things connected to these dark times, when encountered, tend to precipitate flashes in our brains, bolstering the suspicion that, yes, I was surgically engineered in a lab as a military weapon where they wiped my prior memory.  No, it turns out, I just ate at that Arby’s with my ex-girlfriend once.  How long did we date?  That many years?  And so on.  That Arby’s is quite similar to names like Albert Haynesworth, Jason Taylor, Adam Archuleta, and very possibly soon: RGIII.  It’s an annual ritual Washington fans have been participating in for decades.  It begins in fantasy and ends in suppression.  This is fandom.  The F-A-N-D-O-M process is thus:

First: fantasize about victory and happiness.  “I don’t know, maybe Haslett is really good and Shanahan meddled too much.  We’ll see.”  Always said with disclaimers like, “who knows,” but felt like a schoolboy staring at his crush across the gymnasium.  This is a slow-burner starting around the NFL Draft in April and ending around Week 1 in September.

Second: unquenchable seething anger.  “I cannot believe the R-Words thought (insert player name here) had more in the tank and they paid him that much money.”  Said hotly and felt hotly.  Week 1 game just ended and reality begins battle with your fantasies.  Very similar to watching your masterpiece painting being left out in the rain.

Third: neurotic shock.  The majority of every season is spent here.  Your anger flirts with depression.  You are confused that it’s happening, but the hope experienced in the off-season was so intoxicating, you cling to it on every good play.  “Man, I hope (player name) shows something soon or I’m done with this season.  See, he flashes sometimes…”  This haze of anger, depression, and disbelief goes on for weeks, months.

Fourth: disconnect emotionally.  “Sure, we can go to Bed Bath & Beyond, honey.  My Sundays at 1pm just opened up.”  This occurs around week 14, as if the break-up was your choice, but really you were waiting for the playoffs to be mathematically impossible.

Fifth:  observe other fans being happy when they wear their jerseys to watch their teams play in the playoffs.  “Man, you’re so lucky.  How you found a team like the Patriots… You grew up a fan, right?”  This is a time for judging other fans who were grandfathered in because the Packers were winning Super Bowls when they were 12, but also jealously imagining them waking up every morning next to that hot piece of a-word for the rest of their lives.

Sixth: memory suppression.  R-Words fans have been doing this for the past 23 years, with only four playoff years on the way that we haven’t suppressed.  There are more Arby’s memories than stars in the sky.

The problem with the Fandom System is that it sets fans up for more pain every year.  It’s a Groundhog Day of emotions, except Bill Murray never learns anything at the end.  Stop trying to sleep with your TV producer and learn how to love her.

It’s time to gird up your emotional loins; you must do battle with the Fandom System.  To begin breaking the cycle, I suggest that R-Words fans everywhere give themselves a mourning period.  Every Washington fan needs a black R-Words jersey and he should walk around in it for the month of January, ruminating on the the loss of another season.  Greet your emotions like a friend and get to know them, because if you don’t, they will come back every fall like a former fellow mafia member coming to collect for the rest of your life.  The mourning period is important because suppression leads to repeating the same mistakes.

Next, as March rolls around, watch out as those NFL mock drafts begin to get published.  The R-Words have the fifth overall pick.  It’s their first first round draft choice since the RGIII trade, since 2012.  It will be so easy to farm the net for every last mock draft you can find.  Fantasizing about that fifth pick will be like tying your shoes and drinking a heavy whiskey all at once, a sub-conscious habit mixed with a temporary emotional salve. There are names being thrown around like Alabama safety Landon Collins, who is “built like a linebacker with the speed and agility of a cornerback.”  Don’t do it!  He is not Sean Taylor!  How about drafting an offensive lineman?  You’ll begin to fantasize about what RGIII could do with more time in the pocket.  I’ll tell you what he’s going to do: hold the ball longer, you dolt!  Hell, drink a heavy whiskey every night to stop yourself from doing it.  The lesser evils are what’s important here.

Remember.  Don’t suppress.  Here’s a succinct plot summary of the year for you to mourn over.  Bring a box of tissues; it’s a doozy. 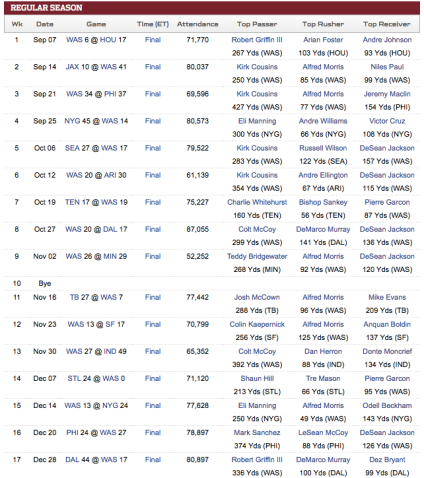 Week 1 vs. Texans (L):  RGIII’s return.  Played terribly.  Only scored six points in loss to the mediocre Texans.  A lot of hope and fantasies collided with reality in this game.  This is when R-Words fans began their long term state of shock.

Week 2 vs. Jaguars (W):  RGIII looked good in first quarter, then got injured.  Shock increased.  Captain Kirk relieved and looked incredible in win over a really bad team.  R-Words scored 41 points.  Hope and fantasies ensued.  Reverted back to Fandom step 1 for a little while.

Week 3 vs. Eagles (L):  Cousins again played well as the R-Words barely lost in high scoring bout with Eagles.  The truth about how terrible the secondary was began set in.  Still hoping and fantasizing. 1-2 record.

Week 4 vs. Giants (L):  R-Words fans returned to state of shock, which they never left until they disconnected emotionally two months later.  Captain Kirk layed his first real captain’s log, throwing four interceptions in the second half as the R-Words were demolished by the mediocre Giants, and this was before Beckham.

Week 6 vs. Cardinals (L):  Another captain’s log against a good team in Arizona.  Three interceptions in this one.  Lots of pictures of Cousins sitting alone on the team bench.  Log must have really stunk.   1-5.

Week 7 vs. Titans (W):  Cousins mustered a half of play and one interception before Gruden pulled him in favor of Colt McCoy who put together an 11/12 performance in the second half.  Winning a game felt weird, even if it was against a bad team.

Week 8 vs. C-Words (W):  McCoy and Baushad Breeland became heroes as the R-Words did three things they don’t normally do.  They beat the C-Words, on Monday Night Football, and it was the first game a Washington QB had started and won in an entire solar calendar year.  Two wins in a row got people talking.  For what reason, it’s hard to say.  They were 3-5 and had looked bad all season.  But you hoped and fantasized, didn’t you, you big idiot.

Week 9 vs. Vikings (L):  3-6 Day, the annual R-Words holiday.  Gruden rewarded McCoy for his solid play by benching him in favor of RGIII, who had returned from injury.  No one could blame him, but this is really the point in the season where R-Words really enjoy the “what if” game.  What if McCoy had stayed the starter?  I’ll tell you: 5-11, maybe.  RGIII played decently in this one, injuring fans with missed throws, while sprinkling them with hope to poison their souls with some beautiful ones.

Week 10 vs. Buccaneers (L):  Bye week to prepare against a bad team created some buzz about going on a streak, ala 2012.  RGIII layed a major number II and everyone wondered if he belonged on special teams.  Season officially lost.  Reason to watch is narrowed down to RGIII, which R-Words fans would use as fantasy fodder for the offseason if he played well.  R-Words fans are till in shock, but some disconnected emotionally here.

Week 11 vs. 49ers (L):  Memory getting fuzzy now, even though it was more recent than Week 1.  Who started at QB?  Anyone?  Nope, not McCoy.  RGIII again looked like special needs material as he threw for 106 yards total.

Week 12 vs. Colts (L):  The one that really got Haslett fired.  The deep touchdown passes to receivers were open by 15 yards or more was obscene.  What was supposed to be Luck vs. RGIII turned into watching Luck play pitch and catch with a nerf ball in his back yard while RGIII rode the pine.  McCoy didn’t play great after the RGIII benching, but he got better as the game went on.  Gutsy seems to be a word for McCoy at this point.  His neck really bulges, which makes people use words like gutsy.

Week 13 vs. Rams (L):  0 points.  McCoy looked bad, and then got injured at the end.  RGIII era got a spark as he completed 3/4 on the final drive.  Amazing that 3/4 would make us hope again, but it did a little.  Like spotting their ex in a bar, R-Words learned they still haven’t gotten over him.

Week 14 vs. GIants (L):  Again, memory very fuzzy.  This is because R-Words had officially disconnected emotionally at this point.  It would have been strange if you had watched this one.  RGIII played mediocre.

Week 15 vs. Eagles (W):  This was weird.  The R-Words beat a good team and RGIII played better than average.  DeSean Jackson played the hero again.  It was weird.  This was purely enjoyed because there were no emotions at stake, as it took place post emotional disengagement.  It was gravy.

Week 16 vs. C-Words (L):  Dallas kept their starters in, but the R-Words decided to rest theirs.  Wait, the R-Words starters would be third stringers everywhere else.  Not you, Kerrigan.  Not you, D-Jax.  Wish that list went on.  Didn’t hurt, though.  R-Words fans had smartly self-protected.

Take.  Ruminate.  Mourn.  For so much, yet so little to happen is an amazing feat for the R-Words.  We think less of Cousins, McCoy, and RGIII than we once did, but not that much.  We still know nothing.  It’s really quite an accomplishment, to keep us in the dark while showing us how the trick was done.  Or is it us who refuse to see?  Will we let this abysmal season be a wake-up call?  More importantly, will Snyder and Gruden?  If they don’t, forget the whole thing.  Either you follow a different team, or you ignorantly participate in the Fandom System.  Lord knows you’re not doing the first one.

Okay, we know Snyder probably never allows the r-word to be said around him: rebuild.  So, here’s the last thing to remember as we round out yet another year of the Fandom System.

As those mock drafts start pouring in and you find yourself sub-consciously beginning the fantasies, remember this:  The R-Words are the WWE of the NFL, except better.  Every week there’s someone surprisingly running out into the ring to betray their teammate with a kick to the back of their head.  Every year, the R-Words are weaving together another season of their soap opera.  The point was never to win; it was always art.  While the R-Words are just as bad, the Raiders and Jaguars are boringly terrible.  Every year, R-Words fans have the opportunity to witness the Shakespeare of our time performing for us another tragedy he has penned.  What is RGIII, if not the classic tragic character, who has done himself in?  What is FedEx Field, other than the island in Lost?  Who is Dan Syder, except for the manifestation of evil?  In a lot of ways, we are blessed.  Enjoy the show and you will recover.

For now, we mourn.