Much like the plot of every M. Night Shyamalan film since The Village, the R-Words are full of holes.  Blame has been hurled at every Washington coach, owner, player, and manager.  Some even believe there is an evil hex on the team.  I know, ridiculous, right?  A curse on the team.  How can something already evil have a curse on it?  It doesn’t make sense.  Jesus of Nazareth was once accused of casting demons out by the power of Satan, to which he quipped, “a house divided against itself cannot stand.”  Then he winked, as he always did to signal the end of a sentence that was to become a famous quote.

The R-Words are evil.  It’s a very important distinction.  Given that, it’s not surprising how they have crushed our dreams in such a creative and innovative fashion this season.  They continue to prove to be on the cutting edge of villainy, shattering evil convention and blazing new trails for aspiring villains to mimic.  We are witnessing art.

To completely chronicle the twisting plot devised by the R-Words this season in one sitting would do it an injustice.  This week will focus on our hopes for the R-Words players at the beginning of the season, and what kind of s-word-storms have befallen them since.  What were our expectations?  What were our outlandish hopes for these Walmart-quality players?  And how much longer are we going to be throwing money at them on their obscenely large contracts? Why do we always believe the propaganda, despite being enlightened, empowered citizens of the sports world?  We are like North Korean citizens living in South Korea, who are still loyal to the North.  Why don’t we change our citizenship to another team?  Unfortunately, that is for another day.  Now, to the players.

R-Words we needed to stay reasonably awesome (because R-Words fans are reasonable people), but hoped would become the best in the league at their position (because that’s what R-Words fans do late at night in their beds) at the beginning of the season: 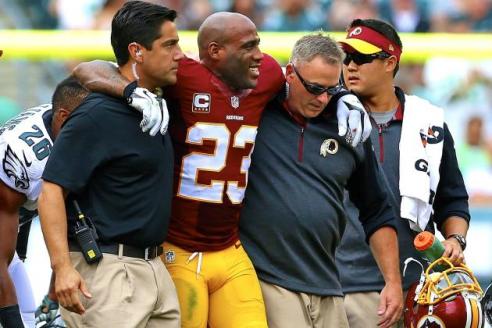 5. CB DeAngelo Hall – Coming off a Pro Bowl season and was the only bright spot in a terrible secondary.  Was placed on IR early in the season.  Just signed a four year contract this offseason.

4. WR Pierre Garcon – Was the Washington passing game last year.  Led the league with 113 receptions, while gaining 1346 yards on the year.  This year, Garcon only has 62 receptions for 694 yards with two games left.  This is a little over half his 2013 production.  Has two years left on his contract.

3. OLB Ryan Kerrigan – What?  A great player?  This is weird.  Kerrigan is having a career year, despite the loss of Orakpo on the other side of the defensive line for the second half of the season.  Kerrigan has 12.5 sacks with two games left, topping his previous career best of 8.5, which he had notched in 2012 and 2013.  Apparently, he wasn’t content with that number and has also recently starting sacking tennis hottie, Caroline Wozniacki, whom Kerrigan should really focus on at this point.  The 2011 first round choice is now the anchor of the Washington defense.  He has one year left on his contract.  R-Words would do well to let him go.  To keep him would mean potential success in the future, and we wouldn’t want that.

2. OT Trent Williams – Coming off a Pro Bowl season, the 2010 first round pick has turned into the only player on the R-Words offensive line at all.  It’s essentially one on four every down, and he still does okay.  Playing reasonably awesome again.  Two years left on his rookie contract.

1. RB Alfred Morris – The guy I feared was merely a product of the Shanahan system.  The 2012 sixth rounder has still proven to be a solid every down back, but he has not been given the ball enough.  His 335 rushing attempts in 2012 dipped down to 276 in 2013 and only 232 attempts with two games left this year.  4.1 yards/carry is his career worst, but it still equals continuous first downs on average doesn’t it?

R-Words we needed to become reasonably awesome at the beginning of the season:

10. ILB Keenan Robinson – An incredibly speedy linebacker, Robinson has proved to be a solid starter after London Fletcher’s retirement.  Will be back in 2015, unless Washington would like to see him succeed in another jersey.  They do like to do that.  One year left on contract.

9. OT Morgan Moses/Tyler Polumbus – Oh Lorde, these two are dumb and dumber.  Polumbus was supposed to be the veteran to hold the job until Moses was ready.  Polumbus, instead, has decided to play leapfrog with the defensive lineman all season, forcing Moses into the game, and he’s really not ready.  The R-Words need their 2014 third rounder, Moses, to develop quickly this offseason.  The R-Words should have known that a guy named Moses is good at one thing: parting the red sea to allow people through.  He is really good at allowing people through.

8. TE Jordan Reed – This dude brims with potential.  If it weren’t for the light speed quarterback carousel, and Reed’s continual lingering tiny injuries, which kept him out of half of 2013 and out of a couple games this year, one must believe he would break out.  Probably in a rash of some kind.  Two years left on contract.

7. S Philip Thomas/Bacarri Rambo/Brandon Meriweather – Rambo has really progressed, recently intercepting the great Aaron Rodgers twice in one game.  Unfortunately, he accomplished this feat in a Buffalo Bills uniform as he was literally fired at the beginning of the season for being so bad.  Philip Thomas is finally on the field after two years of being injured.  Still unsure about him.  Meriweather is a missile that’s always just been fired and should only be used as such.

5. DE Jason Hatcher – Finishing his first of four years as an R-Word.  He’s played good, not great, as Gruden has even said himself.  Glad to have him.

4. CB David Amerson – No one can know if he is any good, really.  The secondary is so bad, it might be worth firing everyone back there.  Either Haslett is as terrible as London Fletcher claims he’s always been, or his players are a bunch of wonky duncers.  The 2013 second round pick is young and still a bit raw.  Amerson gets a pass, as he has been okay.  Two years left.

3. DeSean Jackson – He is the R-Words offense this year and has almost 1,000 receiving yards in an anemic passing game.  Just as good as billed, and further highlights how bad the quarterbacks have played.  I maintain that the R-Words have never had a more talented receiving corps, including Monk, Clark, and Sanders.  They were better, but Garcon, Jackson, and Roberts are more talented and can be better.  First year in a three year contract is thankfully almost over.

2. Brian Orakpo – After being franchised this season, which means being payed the average of the top five players at his position, Orakpo hasn’t played like a franchise player.  He only had 1.5 sacks in six starts.  He’s been good, not great, a distinction other players can afford at a lesser price.  Orakpo must either be signed at a discount or be let go.

DeSean Jackson is the only player on that list who played like the R-Words payed him to.  Let that sink in.

We will end by thanking the R-Words for putting RGIII back in for the final two games of the season.  This turn of events has tickled R-Words fans’ hope bone and we will watch now, even though we hate ourselves for wanting to.  Griffin played last week like he wanted his job back.  His scrambles were beautiful.  His passes, the actual job description of a quarterback, need to follow suit.  He just needs to throw to the receivers, a plan Garcon outlined simply a few weeks ago.

Ah, the dream of Griffin being great.  Just let yourself dream it, R-Words fans.  The only risk is more pain, disappointment, and self-loathing later.  Nothing you haven’t experienced before.

In other news, Michael Vick would consider it a “dream” to play for the R-Words.  Let’s hope he is the only person thinking that.